Recessions will happen. It's just the nature of financial markets. Understanding them is key and understanding your emotions will allow to get through them. You should be rooting for asset prices to get lower so you get more opportunities.

There is a very good quote from Warren Buffet:

I never attempt to make money on the stock market. I buy on the assumption that they could close the market the next day and not reopen it for five years.

I am comfortable using 2009 as our baseline, meaning the odds 2009 repeats itself is relatively low (not impossible). Nothing is certain, but the downside risk does reduce if the market has already declined.

The main difference with the crash of 2009 and this one is the speed at which this one is happening. For example, let's analyze the events that unfolded in 2009. This is a graph from the Irrelevant investor: 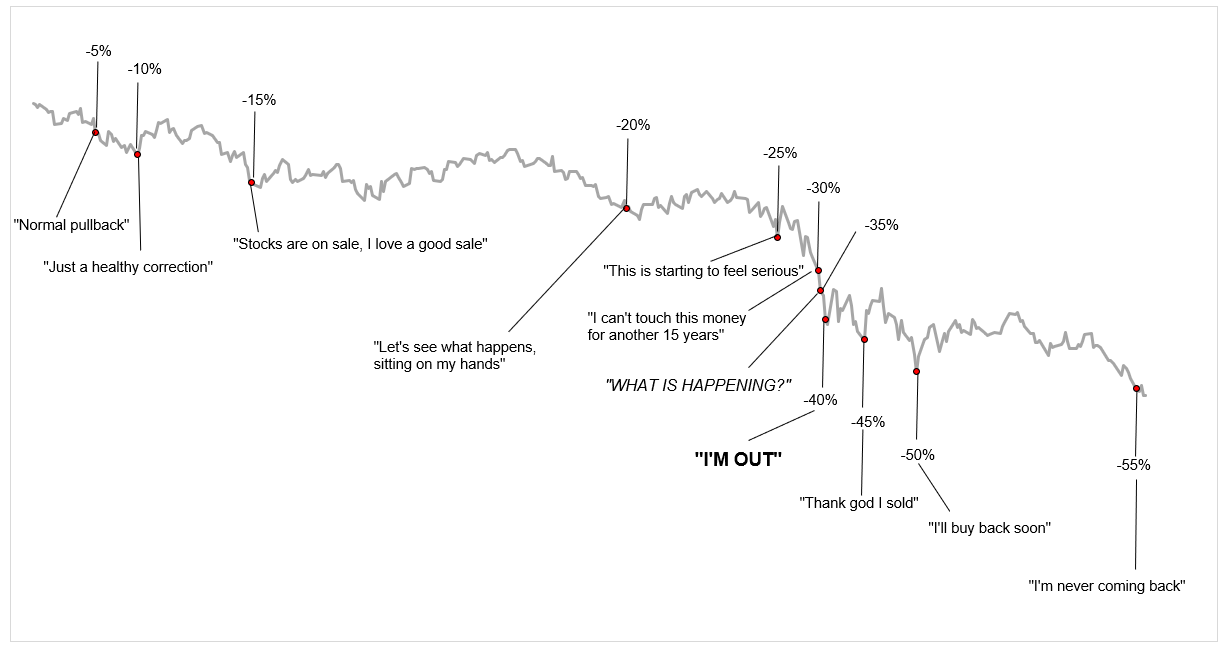 Note that those declines only happen every 7-10 years or so. But you do need extreme patience to be able to wait for those opportunities. Once everything starts going down, it is always keep faith it will ever go back up again. But it does, it always because this thing called inflation.

To prepare for the market correction, you need a plan.

This means, don't wing it. You need to write down your plan and follow it. Don't let you emotion guide you during turbulent time otherwise, you will be left getting punched around without a clear direction (and making costly mistakes).

My plan is the following. I have some cash on the sideline for a few years (in CDs).

I tried to keep my cash position at minimum 10% no matter what happens.
Also, I like to deploy my cash in businesses that have good assets and little debt.

But first, let's take a look at the historical declines in S&P 500:

A few good quotes from this video:

(In 2009) People were talking about the end of the world.
The only thing we have to fear most is fear itself (quote from Roosevelt)
Should we buy or not? If we invest and the financial world ends, then it doesn't matter. If don't invest and the financial world doesn't end, then we are not doing our job.
It didn't matter what you did, as long as you bought. It was a point in time in the cycle, and these point comes along once in a while. You don't need convervatism, caution, control, discipline, selectivity. You need money and the nerve to spend it.

Buying after a market rout is one of the hardest thing to do. Pulling the trigger after seeing your money wiped out by 40% is simply psychologically difficult. It's analogeous to having "balls of steel".

Let's do a thought experiment. If the worse decline possible is 57% (2009). Today, we are sitting at 24% decline, let's take a probabilitic view on the potential remaining decline. 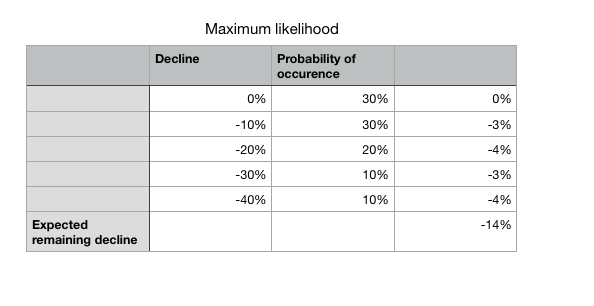 Those are all predictions (and are likely all wrong). No one can know for certain what is the potential decline. But to put things in perspective, if you are comfortable losing another 14% of your investment, then it might be a good opportunity to buy.

Of course, there is a chance that our lockdown drags for a few months until things go back to normal. If this happens, the biggest risk is that companies start layoff-ing workers and some companies go bankrupt which might start a chain reaction.

In a worse case scenario, if we overweight the odds of a 40% decline, we get the following:

If a lock-down of the economy happens, then yes it is very likely that the decline will be steeper. I do have confidence that government around world will intervene to limit the damage.

Note: This article was published on March 14th 2020. It will definitely turn out to be wrong (sorry I can't predict the future), but I'm taking the risk to explain my views and my current sentiment. From the violence at which the market dropped it is very likely it will go back as fast as it did drop.

[2]: The irrelevant investor: Psychology of a bear market

Get the latest posts delivered right to your inbox

Do you want to build real long lasting wealth? What are the secrets for building wealth? People have consistently done it, without only being lucky, in the last few decades. This post will

Be free and wealthy blog
—
Recession history lesson
Share this

Stay up to date! Get all the latest & greatest posts delivered straight to your inbox